We now have the roof on.  It was quite difficult because my harness was made to catch you in the event of a fall.  The clip was designed to be in the back.  Notice the belt on my back to hold the harness together.  We had to retrofit it backwards so we could repel down the roof and pre-drill the holes and then screw it down.  In order to do this you had to support your weight with one arm while you worked with the other. Skylight installed.  I only cut my forearm once on the edge of the roof getting it to the top.  #superglue Interior looking over the deck to the view. This is a sink I found for the bathroom.  It carved out of a petrified wood tree log.  It is stunning. This a google earth photo of our property.  The far left is our current house.  In the middle is Yurt 1 (tarp on the roof) and bottom right is Yurt 2 (the one we are working to finish first).  If you look real close you can see us working on the roof. These are the materials that we have chosen for the finish out.  Flat pebble rock shower floor, tile for the shower walls, bathroom and living room paint colors and high-end vinyl flooring (no grout lines and looks just as good as wood due to a lot of variations in the planks). View from the road with the circular drive 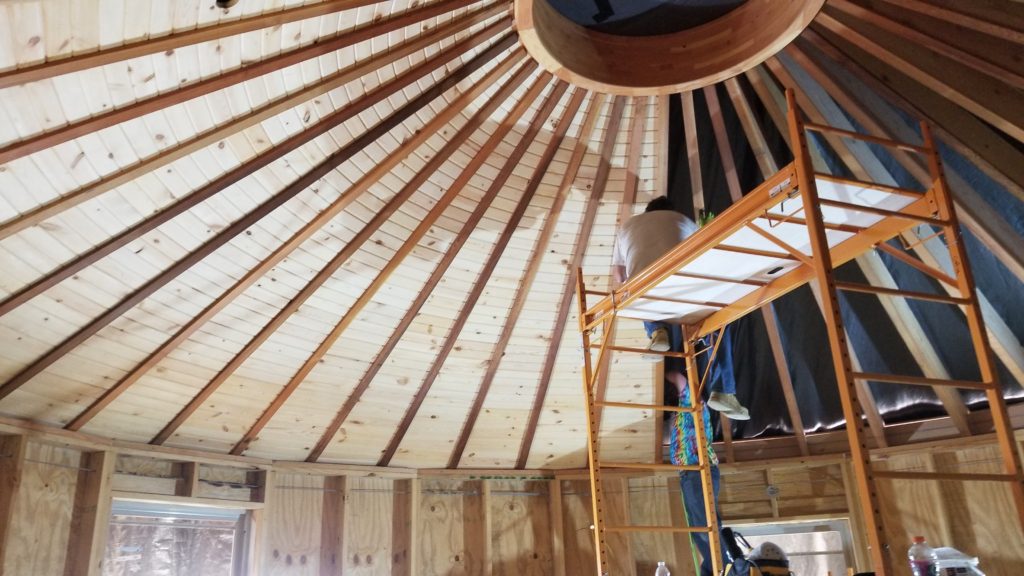 During the inclement days the 20 wall panels are being fabricated.  The sides of each panel is cut at a 9 degree angle to account for the curvature of the yurt.  We are doing 4 picture windows (3.5 feet by 6 feet tall) and a double hung window in the bedroom, bathroom and the kitchen.  So we have 7 window panels, 1 door panel and 12 solid panels.

Notice the bottom cedar sheathing has 2 finish screws on each side.  This is so that after the panels are set, the piece can be removed so flashing can be installed so water will not wick up the panels.

After the pads were poured and cured.  An 8″ double galvanized pin was countersunk into the pad and the bottom of the treated 8×8 pier.  These were plumbed and braced.  Dual 2×12 runners were attached to the piers from front to back.  Then the 2×10 floor joists were attached to the runners on 16 in centers.

Transformer set and hot.Meter base wired and set. Ready for service.

During this time Buck trenched and set the conduit for the electrical and the water to the end of the ridge.  Two more transformer pads were built for the future “family cabin”.

Finally, work has been done on building 2 new yurts.  These yurts will be 25″ across and be about 475 sq feet of living space.  This time around we decided to buy 2 roof kits as opposed to the complete kit.  By purchasing on the roof kits only, we could get 2 delivered on one truck saving in shipping.  Also, I had to buy 2 roof kits to get the roof metal in any color other than silver.  We received the roof kits in April of this year.  We then had to save up some “scratch” and wait for my helpers Gator and JT to free up from previous commitments.

This is pad site 2 before any dirt work had been done. I had Buck put in a circular drive and pad sites for both pad 1 and pad 2. This is pad 1 when finished.

We then had to start laying out the pads for the piers and start the monumental task of drilling the piers.  This lasted about 30 minutes…. Then the call went out to Buck to bring out his hammer to break up the limestone shelf so we could try to auger the holes.

After the the holes were positioned and dug, forms were built, secured and leveled.  This took about 2 weeks. After the forms were in place we poured 8 yards of concrete.  The truck could reach about 4 or 5 of forms.  After that, it was on JT’s back (literally) to wheelbarrow the concrete from the truck to the forms.  This was a long day! Last summer we purchased a large number of Eastern Cedar tree tops (about 140).  We removed the limbs and used a high power pressure washer with an oscillating nozzle to remove the bark.

After the power washing was done, the logs were carefully cut to 16 inch length.

Then the larger logs were split to help speed up the drying process.

We then stacked the wood to dry. (About 9 cords)